Do You Remember What is Important? 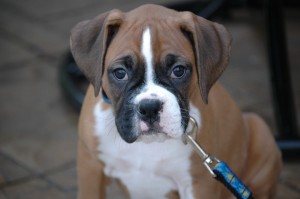 Sorry for the delay on my blog posting…It’s been a tough last week.  I’m not looking for sympathy here, as I know that everyone has them.  Sometimes it is work related – you’ve had an especially tough client to work with, or a project is just not running as smoothly as you would like.  Sometimes it is personal – you have teenagers (enough said 🙂 ) or you are having a tough time meeting your bills because your business had a bad month.
Everyone has them, and tough moments, days and weeks are a part of life.  Someone once told me that if we didn’t have the difficulties or the challenges, we wouldn’t be able to appreciate the successes or happier times.
Last week, my challenge wasn’t work related at all, but completely personal.  My last blog post introduced you all to my puppy, Joey Jackson, who is my infallible walking buddy.  If you missed that post, you can find it here.  Last Friday, my husband and I spent our late evening, early morning with Joey at the Animal Hospital.  It was a  night that seemed to drag on forever, and was draining both physically and emotionally.  About 10:00 pm that night he started throwing up all over our house.  As horrible as that is, boxers have been known to have sensitive stomachs, and we’ve had him not able to keep down his dinner before.  But that night was different.  As a dog owner, and as a parent, we know when our kids aren’t right.  And although Joey has four legs and fur, he is most definitely one of my kids.  The most unusual thing with him is that he stopped moving.  He has been and always is a very active dog.  Moving, jumping and playing are a normal part of who he is.  Even when he is sleeping he is curled up to next to someone in our household, whether that is a person, or our cat , Izzy.  But that night he was immobile. He wasn’t laying down and immobile, but standing and not moving.  For almost 45 minutes, he stood outside in our backyard, and wouldn’t come in, wouldn’t move.
We were on the phone with the vet several times throughout the last half hour, and the decision was made to get him to the hospital.  Normally, we pick up his leash and he comes running, but that was certainly not the case.  We literally were pulling him, one step at a time, towards the front door and the car.  He is a big dog – about 100 lbs, and you could see how much pain and discomfort he was in with every step – which also explains why he wasn’t moving.
To make a long story short, we got him to the hospital and they started looking for what was wrong.  36 hours later, multiple tests, xrays, ultrasounds and guessing they are still looking and exploratory surgery seemed to be the only route.  The only thing that we knew was that it was stomach related, but the xrays or ultrasound didn’t find that he had consumed any kind of foreign object.   It was heart wrenching to see him in so much pain, and even with the pain killers they had given him you could see in his eyes how he felt.  With our other kids, and family members, they can verbalize how they are feeling, what hurts, what doesn’t. But for those of you with animals in your family, you know how difficult it is when they can’t.
So the reason for my post, was not to share the stress of those 36 hours, but to remind you all of the things that are important in life.  Although I had work that I had to do for clients, and there are always things that need to be done at home, none of them were important during those days.   The important things are the people and the family members in your life.
We sometimes forget that when we get so “busy” with work and then regret the moments that we missed years later.
After the fourth day, they discovered that he had pancreatitis, and so began to aggressively treat it with a combination of antibiotics.  He was touch and go for a while there.  They weren’t sure if it was going to get better, and he started to go downhill being in the hospital for so long, that we tried bringing him home.  It was a full 24 hours after we brought him home, that he finally started to make a turn for the better, and eat some food.  He is getting better and stronger every day, and has started to resemble, once again, the puppy that we know.
So make sure that you put aside your computer today and hug your spouse, play with your kids, have dinner with your friends.  Appreciate the connections in your life that give it meaning….the paperwork and the chores will still be there next week.